The Town Crier reports: "JM Stars To Greet The Rebbe, King Moshiach." Yerachmiel Begun and the Miami Boys Choir and Yaakov Shwekey will be appearing at a concert in Israel in honor of the 104th B-day of the Rebbe Melech Hamoshiach.

UPDATE: A picture really is worth 1000 words. Here's the poster for that event.
UPDATE II: Hirhurim comments. 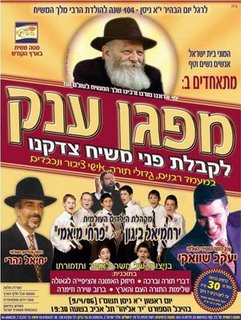 Alexander Gelfand writes about Frank London's album "Carnival Conspiracy: In the Marketplace All Is Subterfuge."

LIFE-of-RUBIN posts about a ten year-old from Alaska who has composed a new niggun for the "Rebbe's kapitel." Follow the links for an mp3 clip of the melody.

Steven I. Weiss asks "What's the Orthodox Bar for Matisyahu?"

Over at The Hall of the Goblin King, the artist known as Steg (dos iz nit der šteg) has posted his original melody for the zemer Yah Ribon, inspired partially by Bette Midler's The Rose.
Posted by Hasidic Musician at 12:34 PM