Teruah has some thoughts about Jeremiah Lockwod's Nigun Project.


One of the original Elders at the late Protocols blog muses "On Music, or When More is More ."

Here's a lovely little ditty from Micahel Wex's latest, set to music by German bassist Heiko Lehmann and friends.
Posted by Hasidic Musician at 10:10 AM

In Which Dm Gets Mussar

Your blog is excellent, although you need to do Teshuva for posting a version of “Who by Fire” that does not include Sonny Rollins!

0:21 to 1:05 of this clip is essentially Yom Kippur Davening Al Regel Achas.

It was a deliberate choice. But, this is a great version too.
Posted by Hasidic Musician at 11:46 AM

Can't Get That Annoying Chassidic Disco Song Out OF Your Head?

Unhear it!
Posted by Hasidic Musician at 11:42 PM 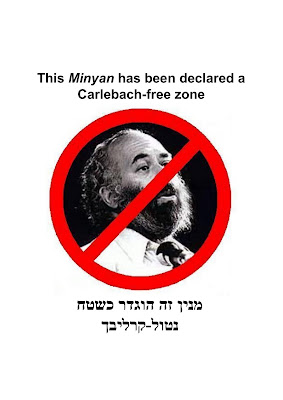 Steve and I recorded a blues version of "Dear Everybody" and posted it to Youtube here.

May we see Gilad ben Aviva back home speedily to enjoy a sweet new year!

I’ve been following your blog for several years now, and I’ve always found it of interest – thanks! I appreciate the balanced commentary (and the lack of comments that might undermine it...) and the humorous bits are always entertaining. I’m from London, so I also enjoy reading about things happening in the US JM world that I wouldn’t know about otherwise.

I got this video in an email from Tunecore this morning – it’s a video response to some blog post that claimed that filesharing is the best thing ever to have happened to music, by someone called Mike Lombardo. I don’t know whether you’ll consider it suitable for posting or not, but I thought you might like it anyway.

Many thanks again for your blog.

Thank you for writing a critique of "Torah is not Hefker". I found that book in shul today while I was davening shacharis and read it. (Apparently, the book was hefker.) I wanted to check out its claims tonight on the internet and found your critique. I agree that the arguments in the book are weak. Furthermore, halacha has to be exact. The author does not explain how one can recognize whether music is good for the soul or bad for the soul.

One argument that did strike me as interesting as a reason to avoid rock and roll music, David Merrill's experiment with mice. Do you know anything about this?

The experiment with mice and rock music is meaningless. It was not conducted by a scientist under controlled conditions. Even if it had been, there would need to be multiple repetitions of the experiment to account for potential biases. One small experiment is simply statistically irrelevant.

As well, the concept behind the experiment seems to indicate the researcher’s bias against rock and roll. In other words, this was not an objective, neutral experiment. There is no compelling scientific evidence to back up Merrill’s claim.

Hi, I read your blog occasionally, and wanted to ask you a question: I learning clarinet, and play mostly contemporary jewish music, from Carelbach to MBD to Lipa, a little old school klezmer, and chassic stuff (like Modzhitz, etc.) I guess most of what I play is the stuff you'd play at a yeshiva-type wedding. Anyway, what keys, if any, are most common in these kinds of music? Are there any specific keys I should be certain to know if I want to eventually play this music with others? Of course, I would eventually learn to play in any key, but where should I devote my efforts first? Am, Dm, Cm, Em? Thanks for any advice you can give me. Aharon.

P.S. I am aware that the clarinet is a transposing instrument. I'm wondering what concert keys I should sound in, I'll take care of the transposition.

The quick answer is, it depends. What are you trying to play? What context? There are some standard keys that wedding bands use for specific songs, so if you're trying to get onto that circuit, it might be worth learning them in those keys. For example, they usually play Od Yishoma in Gm.

That said, there is no specific key that is the "right" key for Jewish music. It depends on the song, range of the singers (if any), and instrumentation used. I would highly recommend not focusing on one key for Jewish music, but rather learning to understand how keys/scales work, and developing the ability to play in all of them.

(Incidentally, I took the time to send this response to Aharon's question when it first came in, but he didn't have the courtesy to thank me. This is something that has been happening too often. It's almost always from people interested in a certain repertoire. If you're going to email someone and ask them to help you, at least show a little basic courtesy.
Posted by Hasidic Musician at 9:31 PM

The Shwekey/Amnon Yitzchak Ban Contretemps Gets Even Weirder

... at Parsha Blog: "Manipulating the Gedolim: Did Rav Amnon Yitzchak do this to Rav Shteinman?" Excellent questions!
Posted by Hasidic Musician at 11:54 PM

I want this for my B-day!

A nice review over at the Forward's blog: "These Breslov Tunes Were Saved by Rock & Roll."

On the Jazz front, check out this trackby Danny Zamir and Evyatar Banai.

"Jewish Music’s Elite Sing For Rubashkin." No comment. On the same topic, here's "A Song for Sholom."

Check this out! Makom on Kobi Oz's Mizmorei Nevuchim. Resources for educators who want to use the material on his new album.

Patric Aleph writes "Wearing A Yarmulke Got Me Laid." Oy.

Augean Stables: "Only Israel has no right to defend itself…"

What? "Rabbinate To Strip Authority of Rabbis Who Sing Under Chuppah."
Posted by Hasidic Musician at 10:25 AM