I had the privilege of guesting at a simcha recently in one-man-bandville. 'twas an informative experience.

2) Carlebach's V'hayu Limshisa as a 4/4 rock song! Arranger technology can make even a one finger player sound way better than he deserves. That said, the musician still does need to be able to tell the difference between counting to three and counting to four.

3) Who said musicians need to present properly/dress up for simchas? Apparently, there's no need to shave, put on a jacket, tie, or even tuck in your shirt.

4) Apparently, disco is the style of choice for "dinner" music. Who knew?

So, I've fallen woefully behind on reviews and the stack has been piling up...

I've just loaded the review CD's/zip files into iTunes, and am hoping to get to them in the near future.

Email ThisBlogThis!Share to TwitterShare to FacebookShare to Pinterest
Labels: Reviews

In the previous post, I linked to a widely publicized report that "R’ Elyashiv Refuses to Sign Israeli Ban On Chasidic Music ."

This past August, Life in Israel posted a video of Rabbi Amnon Yitzchak attempting to get Rav Shteinman to sign onto a ban against one such singer, without success. That video is also a sad example of how people attempt to manipulate these elderly rabbis. 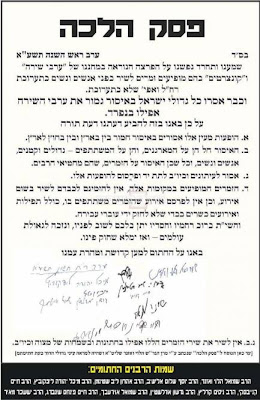 It bans concerts whether or not they are separate seating events.

The bullet points:
1) These concerts are prohibited both in Israel and in "chutz la'aretz."
2) The prohibition includes everyone, organizers, participants, men. women, children, and especially the singers who are "machtiei es harabim" (lit: induce the public to sin).
3) It is prohibited for newspapers etc. to accept ads/publicize these events.
4) Those singers who appear at these events may not be invited to sing at any event, including tefilot and "kosher" occasions i.e. at simchas.

The postscript says that one should not sing any of these artists songs even at kosher events, mitzvah celebrations, etc. (The ban explicitly states that this postscript was agreed to by all of the signers. Two of the alleged signers? Rav Eliashiv and Rav Shteinman.

Nice. Once again, a huge chillul Hashem on the part of those opposed to this music and these events.
Posted by Hasidic Musician at 9:08 PM

According to VIN, "R’ Elyashiv Refuses to Sign Israeli Ban On Chasidic Music."
Posted by Hasidic Musician at 10:29 AM