Back This Up? R' Belsky on Sefirah Music

Had a convo about so-called "Sefirah music" recordings with a rav. When I told him that I'm interested in seeing some actual responsa addressing the subject, he told me Rabbi Belsky wrote a teshuva about it and gave me the following column. 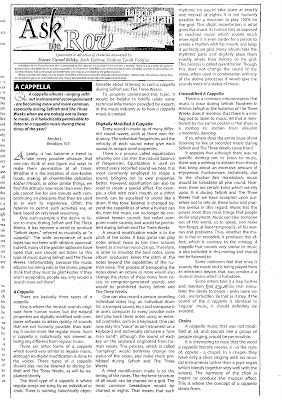 Only problem is, this contains many assertions (halachically and musically) without sources. There is clearly some misinformation in what he's been told about the recording process, about human beat-boxing, and vocal bass singing. (See Bobby McFerrin and Rockapella for just two counter-examples.)

Does anyone have any sources for Rav Belsky's implication in his opening paragraph; that Pesach cake, for example, ought not be permitted?

Who are the "gedolei rabbonim" who have ruled that these recordings should not be listened to during sefirah and the Three Weeks? Have any of them written teshuvos about this topic? Do any of them distinguish between sefirah (a relatively recent minhag, not sourced in primary texts, as acknowledged later in the piece) and the Three Weeks?

What is R' Belsky's source for asserting that the first of his three categories of acapella has the halachik status of instrumental music? The second? Alternatively,if those are prohibbited why is the third category permitted? Would it make a difference if recordings in the third category are made by trained singers vs. untrained amateurs?

What are the parameters be to determine what is/isn't acceptable? In other words, what's the dividing line between types two and three?

I've been looking for sources to back up these commonly made assertions, but have yet to find any. Without sources, Rav Belsky's teshuva reflects a hashkafic approach, but is not compelling on a halachik level. I've asked this in the past. Is anyone aware of a halachik argument opposing "sefirah recordings"? Perhaps even Rabbi Belsky's for this column?
Posted by Hasidic Musician at 11:57 AM