The past four years have been fraught with excitement and challenges for Matisyahu and his band mates. Since the release of his 2004 debut, Shake Off The Dust... ARISE, Matisyahu has continued to bring his uncanny, electrifying fusion of orthodox Judaism and classic reggae music to millions of new listeners. His first release on Epic Records, Live at Stubbs, a highly successful live concert recording from the famous venue in Austin TX, has sold nearly 700,000 copies and is certified Gold. 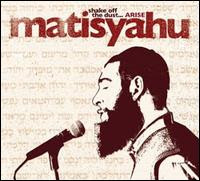 Jack is a poshiter yid!