Girls' Night On Tonight at Makor 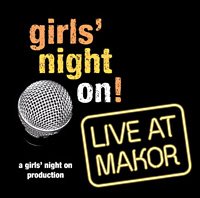 Tonight is the Girl's Night On event at Makor!

This event is also a CD release party for their album "Live at Makor" which captures some of the performances at the last Girls' Night On event. Each track features a different performer.

Go, buy one (or many) and show your support for for creative Jewish music.

In a similar vein, I'd like to note Nishmat Hatzafon, a Jewish women's performing arts company, is performing for women only on Thursday evening. Here are the details:

Nishmat Hatzafon's last performance, this past Thursday night in Washington Heights, was a collaboration with Neshama Carlebach.

There is a growing "scene" of creative frum women performing for women in the city. What's unique about this, to my mind, is that these are not commercial attempts, but artistic ones, as opposed to much of the music for women (not that there's that much) being sold. It's neat to see that there's so much talent out there and that its being used rather than stifled. It's worth supporting.