Interesting discussion on the evolution of Chabad Nigunim.

Check out the recording (attached) of Nigun London. This was the Cut 1 on the very first Nichoach album. (No Disco breakdown on Part C) The accompanying notation from Sefer Hanigunim (link) does not match.

Also attached is my transcription of the Alte Rebbes Nigun. To illustrate the following. The recurring 2/4 bars reflects the way Chabadniks actually sing the song. No printed sheet music reflects this (including Sefer Hanigunim). My thoughts on Sefer Hanigunim. After having gone through the book several times I can only surmise the following. The copyist hired to do the job was a competent musician. The Chosid they got to sing all the stuff to him must have been drunk half the time. There is some weird stuff in there.

As for Keili Ato. Again, the recording seems to be fairly accurate, but as you point out, the notation from Sefer Hanigunim is not.

My informant married into an old Chabad family and recalls hearing the song sung as notated in Sefer Hanigunim. Its a chicken and egg question. Interesting.

An old pet peeve of Lubavitchers about Sefer Hanigunim is that was not accurate as to how the Nigun was actually sung. I heard once that it was because Sefer Hanigunim was written for piano, or for instruments in general (you would know), and therefore deviates from how it is sung. The correct version is the more popular one, or the ones on Nichoach (Nigunei Chabad).

Those #!*#! piano players!!! Messing up Chabad notation for everyone else! [/sarcasm] Accurate notation of a melody doesn't depend on the instrument it's written for.

Attached is the poster for my Kumzitz/concert in Lawrence on Thanksgiving weekend. Please feel free to pass this on! 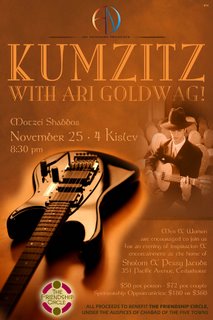 I think it is a damn shame the blogger you cited felt free to question the legitimacy of some people performing at the recent Carlebach Yahrzeit Concert. Everyone and his mother seems to think they have the true source of what constitutes a proper Carlebach performer. One can decide if they like or dislike any individual singer, but regarding Shlomo, his musical tastes and influences were wide enough to accommodate a variety of performance styles.

The problem of people taking Shlomo's music without permission is an old one, and I discussed it with him when we last performed together. He asked me my opinion, and I spoke to him at length about the need for getting a lawyer to track the recordings that concerned him. I don't know if my advice was good, but I know he took the problem seriously. But I also know that the Carlebach shul was involved in the details of the concert, and obviously they felt there was a sufficient connection to the performers in question to invite them to sing.

Yisroel Williger and Shloimie Dachs in particular have long favored Shlomo's music, even before he died, and my impression is that they are sincere in their appreciation of his music. I cannot speak for Wald, because I don't know him that well. The folk rock chevra and their adherents have added a wonderful voice to Jewish music, although it should be pointed out that they are following the path laid out by Stanley Miller, Diaspora, and Shema Koleinu thirty years ago. But they have not cornered the market on sincerity, and most of them have not been performing Jewish Music in any style long enough to have gained the perspective necessary to support their self righteous judgments.

In other words, just shut up and sing.

I agree that the sense some have that Williger et al are not entitled to sing Carlebach is wrong, and have written much the same thing in the past, for instance here. The notion that only acoustic guitar players and J-rockers are "authentically" Carlebach is silly. That said, there is a "scene" of musicians who play events throughout the year for the Carlebach shul, often for little or no remuneration, and its a little sad that the Carlebach shul feels it has to go to "name" Brooklyn performers for their big events, rather than showcasing their own. But, that gets into the topic of "You Owe Me A Job!" Valid or Not?". More on that soon!
Posted by Hasidic Musician at 10:28 AM