From the mailbag... (in defense of Williger edition)

The author of "Frum With Questions" responds to Jordan's comments.

I am posting this because I feel it is representative of views I've often seen expressed. My response follows.

I am the author of FrumWithQuestions and I would like to thank you for linking my post. I would love to reply to the guy whose response you posted or would love to him to comment on my blog. I would love for this person to hear the difference between the Williger Carlebach Shabbos albums and Ben Tsion Solomon and Sons Carlebach Shabbos albums. Vocally and musically you cannot compare the two. Not only that the Williger album is "composed" and many of the things are not sung in the right way. I would questions if even Williger has had proper vocal training. How come he did not produce any Shlomo albums while he was still alive? Did they ever perform together? Same questions apply to Dachs. I also want to note that these "concerts" and all of this commercialization did not start until Reb Sammy left the shul. As a result many of the old chevra involved left the shul and moved to Israel or elsewhere because of what is going on there. Who is responsible I don't know but it is wrong and things are no longer done in Reb Shlomos spirit.

I asked him what he means by his assertion that "the Williger album is "composed" and he responded.

Williger as well as alot of these other clowns, pay a composers to write and compose the music they put on their albums where artists such as Ben Tzion are real musicians do everything themselves. I was actually at a Friday night davening with Williger and not only did he sing everything wrong, he did it as a performance. He sings in a way which makes it impossible to harmonize (since he is nasal) and he does it in a way which no one can get involved in the davening which defeats the purpose of a Carlebach davening. These people are in it for themselves and for the money. I don't know how it can be more clear.

The level of animosty evidenced here, which I've seen expressed towards some J-music performers before, especially from "Carlebach afficionados" is unwarranted. The claims made here are for the most part silly and the personal attacks on Williger and Dachs are just nasty. If you don't like a performers style, don't listen to his recordings. It's as simple as that. Musical criticism of their albums is certainly fair, but personal attacks and gratuitous nastiness is just wrong on so many levels.

To address your points:

Do you really believe that it's not OK for a singer to release an album with actual musical arrangements? R' Sholmo Carlebach, whose authenticity you're so vigorously defending, featured the work of arrangers like Milt Okun on his albums. I'd strongly suggest re-listening to "In the Palace of the King". Incidentally, as far as the Williger Carlebach CD's go, I'd say no arrangements were harmed (or even used) in the making of those albums.

The issue of whether or not a singer has had "proper vocal training" is irrelevant. These are recording artists with many albums out. You're not their producer. You're a potential customer. Or not. It's your choice.

The notion that "many of the things are not sung in the right way" is a popular peeve among Carlebach groupies. My readers know that I am interested in tracing the evolution of nigunim, discovering the "authentic" version of melodies, and similar topics. That said, the nature of folk music is that it evolves from community to community as well as over time. Like it or not, many Carlebach melodies have attained the status of folk melodies in the Jewish (not just frum) communities. Different people will sing them differently. It's unfair to criticize a singer for singing a song the way many in his community do.That cat's out of the bag already. Deal with it. Or not. Again. It's your choice. No one is forcing you to attend Williger concerts or buy Dachs CD's.

You ask why he didn't release Carlebach albums while R' Shlomo was alive? That's irrelevant. As is whether or not they performed together. Any artist is entitled to record Carlebach tunes as long as they obtain proper licensing (which is compulsory according to US Copyright laws which also sets the royalty fee) and credit the songs appropriately.

As far as the whole turning davening into a performance goes… I agree. See here, here, and here.

Finally, you assert “these people are in it for themselves and for the money.” You have no way of knowing this, but even granting your assertion, so what? People are entitled to release commercial albums. If you don’t like them, don’t buy them!

On a related note, Psachya writes:

To add a little to what Jordan said re the recent Carlebach shul concert. If you really want to know what is "authentic" Carlebach, it might be instructive to actually listen to some of Rav Shlomo's original recordings. The folkies & J-rockers will usually point to albums like "Live at the Village Gate," which is just Rav Shlomo & his guitar, as raw as it gets; they'll also point to late recordings with Diaspora Yeshiva Band and future members of Soulfarm - all great recordings, by the way. But how about "In the Palace of the King," one of the first modern Jewish albums to feature a full Broadway-style orchestra, with very sophisticated arrangements? How about "Yisrael B'tach Bashem," possibly his most famous album, featuring none other than Yisroel Lamm & Neginah Orchestra? How about his encyclopedic career retrospective, a multi-album, two-year project arranged by Steve Bill, featuring Yaron Gershovsky on keys? Even his earliest albums arranged by Milt Okun (of Peter, Paul & Mary fame) feature cantorial choirs and the like backing him up. In other words, we can see by Rav Shlomo's own recordings that his compositions work in a variety of settings and styles, which is the mark of truly great music. When someone like Yisroel Williger records albums of "Carlebach Nusach", he is as sincere as anyone (and, by the way, more "authentic" than most). I'm a little tired of people who confuse "authenticity" with "the music I like to listen to". It's intellectually dishonest - just say that you don't care for the style, and move on.

In response to the recent shenanigans about “renting” CD’s……we have decided that people no longer can download the show for free…but that they need to email us back the mp3 in 10 years, delete the file from their computers, and give us their Ipods. In addition we are charging 10 cookies, 2 Diet Dr. Peppers and a coffee for renting the show…..

Listen to the latest show for more…. 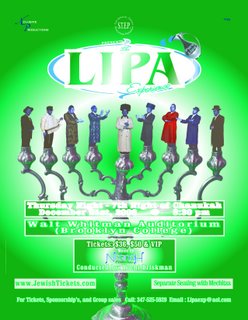 Posted by Hasidic Musician at 7:26 PM