I've been following the ban trend on this blog for quite a bit, and here's an interesting attempt by Mishpacha to counter a ban. Very Alinsky.

The same logic would apply to the Lipa ban, the ban on Rabbi Slifkin's books, etc.

Of course, since we're not dealing with logic... In any event, the fact that Mishpacha's people will make this argument publicly is quite relevant. Attitudes in the community have been shifting and the end result is a decrease in Kavod Hatorah (a bad thing), as well as a reduction in the effective authority of the gatekeepers and those rabbis who rule on matters they don't understand (a very good thing).

Incidentally, there's still time for you to win an exclusive T-shirt with my commentary on bans here. 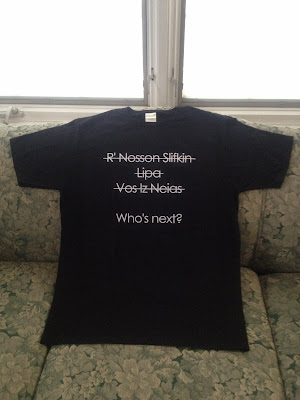 Posted by Hasidic Musician at 11:13 AM