Just got off the phone with a yekke (German-Jewish) client who hired me for an upcoming event. He booked me for three hours from precisely 6:20 to 9:20. I told him I don't mind giving an extra few minutes until the party ends at 9:30, but he insisted that a three hour booking mean exactly three hours.

"The Foodie Waiter"
Offers us soup. Comes back 10 minutes later with another bowl to say "I gave you the wrong one. Try the squash soup, it's much better!"

These overweight peeps stroll past the bandstand on the way out. The caterer has helpfully placed a shelf unit full of deserts right next to the band. As they pass it, and keep going, the wife looks longingly back at the display. "You don't need that!" says the husband. They continue on towards the door, until, in one swift maneuver, the wife does a 180, heads straight for the shelves and grabs an eclair. Whereupon, the husband looks at us, shrugs, heads over to the shelves, and downs an eclair whole. Sated (for the moment) the two exit stage left.

This guest stakes out a place against the wall near the band. Casually leaning, he provides color commentary to an imaginary audience, about all of the guests entering the room. Sample quote: "Hehey! Captain Homo is here! Oy!

This peep handles janitorial services. When the bandleader arrives to set up and notices a dead roach in the middle of the band's space, he points it out to this guy. "Yeah!" The peep laconically responds. "He's still moving a bit. I been watching him all afternoon!" Naturally, it doesn't occur to him to remove said roach until specifically asked to do so. For fun, here's a pic of said hypothetical roach. 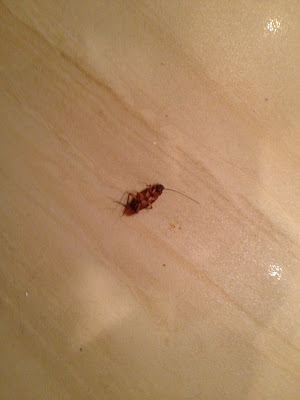 This peep will come up to the band at an affair and inquire about a date in the immediate future, say within the week or so. The sole concern is price, and their budget is not realistic. Sample inquiry/offer: "I'm running a singles event next Sun. I'm expecting 100 or so people. Can you come play for the first half hour of socializing and then the last hour of desert. I don't need you to play for two and a half hours in between. I can offer $100 and you'll get exposure."

"Bathroom Phone Call Dude"
A word to the wise. If you're a waiter skipping out on the gig for a few minutes to make a romantic call to your girlfriend, a center stall in the bathroom is not the place to go. Even if you're not actively using the bathroom, the folks on either side of you sure will be. The constant bathroom noises -- urinals flushing etc. -- will not be conducive for romantic talk. Not to mention the fellow who just had too many tacos at the buffet, and who is now in the next stall...

"The Hapless Sound Tech"
We're setting up to play at a dinner, and there's a sound tech next to us setting up a wireless mic/speaker for speeches. "I can't get it working", he complains loudly. "It was working fine yesterday." After a couple of complaints, we take a look. He's got the wireless mic switched on, the portable powered speaker switched on, but no receiver and he had nothing connected to the speaker inputs. Um, think that might be the problem right there?

"The Demanding Client"
We need music now! We know you just played for over an hour straight and there's a long dance set coming up right after this short video presentation. But, our audio isn't working, so we need you to put down your dinner plate and come play background music for the video. No break for you! Oh, and we'll hit you at the end of the gig with the "Check Bearer"

"The Check Bearer"
This peep works for the organization hosting the event. He is not the contact person you've dealt with before/at the event. His sole job is to bring the check to the gig, and hold it all night (in case you don't play appropriate background music?). This peep inevitably leaves before the event is over, without handing over the check. It will take at least a week before you receive said check in the mail.

"Get On With It"
This peep, a parent guesting at the end-of-year senior dinner will not put up with the school administrator's bloviating. When said adminstrator, after a long and meaningless intro, announces that he will not proceed until there is absolute silence in the room (some students were whispering), this peep shouts out: "Get On With It!" It took the flustered admin 20 minutes to recover, and things moved quicker after that.

"Mrs. Dropped Skirt"
Ladies, a word to the wise. If you've lost weight or have an issue with the clasp on your skirt, you might not want to wear it for dancing at a wedding! Just saying!

"Can't We All Just Get Along?"
Played a wedding where there were four separated seating sections, each walled off by mechitzos. One for men, one for women, and two for mixed seating, separated by side, since there was a divorce in the family and apparently his & her relatives/family members could not be seated in view of each other. So sad.

"The Trailer Park Chupa"
Played a backyard chupa, where the host decided it would be a good idea to decorate the yard in trailer park style. Seriously. They brought in a Port-a-Potty, which was so not needed. Then, they "decorated" the potty by hanging old flowered bedsheets from clotheslines around it. The day-long rain didn't help, things. Neither, did the yellow and blue striped tent they had installed for the chupa. Or the handmade "exit" signs they felt compelled to add to the white tent the cocktails were in...

Posted by Hasidic Musician at 9:10 PM