Glen Tamir writes a letter to the editor of the Jewish Week.

Last week’s letter “Matisyahu Debate” ends with the writer’s assurance that Matisyahu and Chabad are laughing all the way to the bank. This is part of the reason that the “chasidic reggae superstar” is not considered a “reggae” musician.

Reggae can be considered to be a uniquely Jamaican art form. There is nothing “racist” in saying this. If one is to co-opt this form of music, one should show respect to the pioneers and roots of the music. Even Bob Marley, arguably the most recognizable reggae artist, would never allow himself to be billed as a “superstar.” His message was a universal one, not a Jewish one. The universal message of peace and justice is the true essence of reggae music.

Matisyahu and his handlers have done a terrific marketing job and have no doubt made a lot of money. Ponder this question: If Matisyahu didn’t wear a black suit, hat and tzitzit, would he have been so popular and marketable? I think not.

The notion that a musician's financial success means that he isn't a "reggae" musician is silly. So is the argument against allowing himself to be billed as a superstar (assuming he even has a say in that).

Tamir's final point, though, is right on the mark.

Speaking of, here's a Jewish Week article on the Matisyahu/JDub contretemps.

Here's more on the meshichist concert in Israel this Sunday. Apparently, Yerachmiel Begun, who together with a small group of boys from his Miami Boys Choir, is a featured performer at this event has been disingenuously referring to the event as a "Bein Hazmanim show." Here's an excerpt from a recent interview with Nachum Segal on JM in the AM:

So, once again, here's the poster for that event: 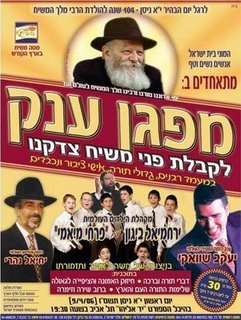 Nothing to see here. Move along.
Posted by Hasidic Musician at 9:09 AM