It's A Beautiful Day For A Ban! - UPDATED 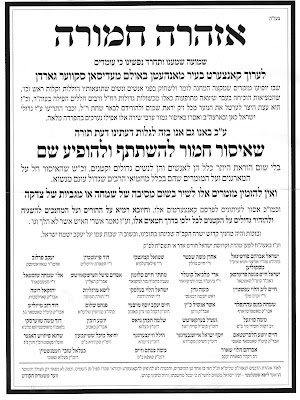 It refers to the performers as "mezamrim m'ktze hamachane" (singers from the edge of the camp) and says [in Hebrew] "they're going to sing and joke in front of men and women with an outcome of frivolity and light-headedness." Oh, dear.

The ban goes on to assert that all concerts are prohibited. It also proclaims an "issur" for newspapers to publish ads for the event. And, it urges all to boycott these musicians and not hire them for your personal simchos or for tzedakah events.

The ban signers include various Hasidic leaders from many sects, as well as a number of "Litvishe" Roshei Yeshivah, including Rav Aaron Schechter (of wig store boycott fame), Rav Matisyahu Solomon, and many more.

The most outrageous part of this is that the ban signers include Lipa Margolies. This is the man who knowingly sheltered a child molester in his school, Torah Temimah, for 30 years. He is not, and never has been, a respected Rosh Yeshivah whose opinion is viewed as Da'as Torah. He simply owns Torah Temimah, a private school.

Regardless of whether one agrees or not with the ban, one must acknowledge that Rav Matisyahu Solomon, Rav Dovid Feinstein, Rav Shmuel Kaminetzky, etc. are recognized as prominent rabbinic leaders whom people contact with "shealos". Virtually all the signers serve to represent different "constituencies", like Satmar, Vishnitz, Bobov, Vien Skver, Belz, Chaim Berlin, Lakewood, etc. signaling to members of those communities that the ban applies to them too.

Including Margolis among the ban signers serves no function. His presence there adds no influence in any sector of the community. It only serves to represent him as a respected authority in the community, something he never was, and certainly something he isn't, after the evil he perpetuated on three decades of students at his school.

Even if you grant the premise of the "ban-ers", this ban itself is a bad thing, for the message it sends about this issue. For shame!

UPDATE:
Life-of-Rubin says some are speculating that this may be a fake and he also posts a link to the blog, CIRCUS TENT, where this ban was first posted early this AM.

UPDATE II:
I have today's Hamodia here and the ad appeared as a full-page ad in page D16a.

Tzig points out that the text of the ad comes from a different ban.

THE KOL KOREH WAS AN OLD, RECYCLED ONE FROM LAST YEAR, WHEN THEY WENT AFTER FRIED AND MBD IN ISRAEL!!! (read the line that begins הוא עצת היצר, and read the next line.)

The language used is that the rabbonim "here in Israel" as well as those in the USA prohibit concerts. A strange choice of language for a ban signed by US rabbonim.
Posted by Hasidic Musician at 9:05 AM