Continuing my review of Rabbi Ephraim Luft's book, "The Torah Is Not Hefker"....

The first installment can be found here.

As promised, before continuing with my critique of the substance (or lack thereof) in his book, I intend to address his musical ignorance as evidenced in the rules for playing Jewish music posted in the BBC article 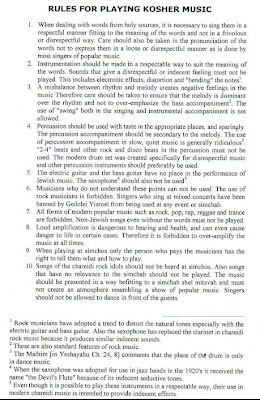 I'm not going to go through all of these; they're plainly arbitrary and absurd. What is important to note here is the evidence of Rabbi Luft's musical ignorance with regard to the terminology he uses. He also seems to be unaware of the role different instruments play in the contemporary simcha ensemble. And, his music history is inaccurate. This is extremely relevant, since Rabbi Luft is holding himself out as an "expert" on music. His credibility as the head of the Committee for Jewish Music" is predicated on the assumption that he is knowledgeable about the subject.

Here's the ad for his committee he published in front of the book: 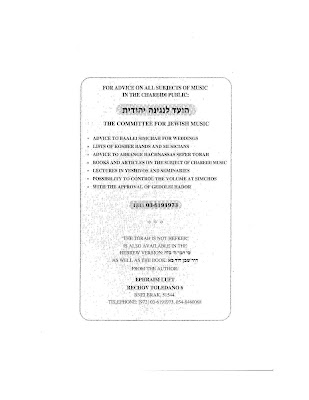 Rabbi Luft has set himself up as an expert on music who is qualified to issue standards and opinions. Yet a close look at these rules alone, not to mention his other writings, reveals his ignorance.

I'm not going to go through all of these; let's look at rule # 4 as as representative.

"2-4 beats" and other rock and disco beats in the percussion must not be used. The modern drum set was created specifically for disrespectful music and other percussion instruments should preferably be used." In a footnote, he cites "The Malbim [in Yeshayahu Ch. 24, 8] comments that the place of the drum is only in dance music."

The language of this rule alone proves my assertions about Rabbi Luft's musical expertise and it also proves that he misrepresents Torah sources.

2/4 does not mean what Rabbi Luft clearly thinks it does here. It's a time signature, not a description of rock beats. What Rabbi Luft means to ban is a backbeat, the emphasis on beats two and four, as in much pop/rock music. This is elementary music terminology. It is simply impossible for a musically knowledgeable person to mistakenly refer to 2/4 in this context. It makes no sense. Anyone that can make this error is clearly ignorant of the "Alef-beis" of music terminology.

Here's a scan of that notation: 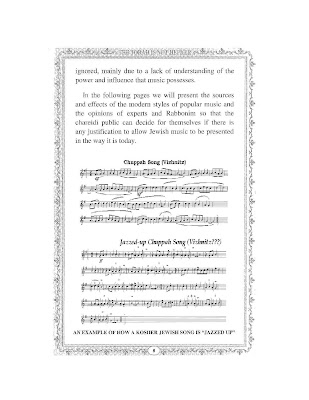 Incidentally, a friend and I recently got together to play through both versions in Rabbi Luft's honor.

Sholom emailed on this very point:

I keep reading, here and elsewhere, about Ephraim Luft's attempt to ban, among other things, what he refers to as the "2-4 beat".

But I don't think he means what you think he means. You are a musician, and much of your readership is comprised of either musicians, or other people knowledgeable about music, so you naturally interpret this statement the way any musician would, namely the 2/4 time signature, and (rightly) ridicule him for attempting to remove such things as freilachs from our repertoire.

I submit that Rabbi Luft, who is evidently not a trained musician and probably can't read sheet music either, probably wouldn't recognize a time signature if it bit him on the nose.

So what then does he mean? Judging by the rest of that paragraph, it seems to me that what he's trying to describe in his clumsy way is the rock 'n roll back beat, which of course emphasizes the second and fourth beats of each measure. This fits in with the rest of his rant about "rock and disco beats", which as mentioned above are usually in the 4/4 time signature.

(Of course the back beat has been vilified by clergymen pretty much since the legendary Earl Palmer introduced it into the mainstream in December of 1949, so "ein kol chodosh tachas hashemesh"...)

I've been letting people have fun with the whole 2/4 thing because one way to demonstrate a flaw in legislation is by showing how easily it can be misinterpreted.

Rabbi Luft's assertion that the modern drum set was created specifically for disrespectful music is a misrepresentation of reality. According to Wikipedia

'Drum sets were first developed due to financial and space considerations in theaters where drummers were encouraged to cover as many percussion parts as possible. Up until then, drums and cymbals were played separately in military and orchestral music settings."

Finally, and perhaps most tellingly, Rabbi Luft's representation of the Malbim on Yeshaya he cites in the footnote is false as well. As with his musical assertions, Rabbi Luft's surprisingly infrequent Torah assertions (considering that he claims to be standing up for Torah) are often not accurate representations of the source cited. The Malbim he quotes does not say that "the place of the drum is only in dance music." On the pasuk of "Shavas mesos tupim...", the Malbim comments: "Ve'al yedei shebatlah hayayin nishbisu harikudim shehayu regilus la'asos betupim u'vemecholos, she'hatof haya meyuchad lerikud umachol,ve'al yedei zehmemeila chodal lashon alizim." I've italicized the part of the quote Rabbi Luft distorts.

The Malbim does not say what the role of the drum IS; he makes a historical claim as to what it WAS in Yeshayahu's time. That's very different. (I'll let the musicologists address whether it is correct. I don't have much knowledge of drum customs in Biblical times.) Rabbi Luft is misrepresenting the Malbim's comment.

For the record, even if Rabbi Luft's representation of Malbim would have been correct, it still would be irrelevant because Malbim's gloss suggests this as commentary, explaining pshat in the pasuk, the meaning of the verse. The Malbim did did not issue this as a Halachik ruling. Neither has anyone else. Furthermore, even if the Malbim had issued a ruling to this effect, it still would not be binding on the community, as evidenced by the fact that no Halachik authority has validated this position in the intervening years.

In short, Rabbi Luft has no Halachik or Hashkafic source prohibiting the use of drums/percussion on slow songs. His attempt to represent that he does represents ziyuf haTorah.

To sum up, looking at these rules, we can easily see that Rabbi Luft has neither the musical knowledge or vocabulary to write music legislation. Even if one argues that such legislation is needed, and frankly, I think the notion is absurd, Rabbi Luft is clearly not qualified to be the one making these decisions and/or drafting rules.

The next post in this series will begin looking at the "content" of "The Torah Is Not Hefker".