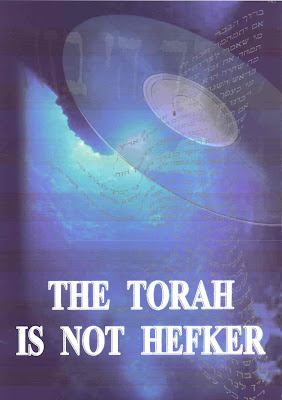 Recently, the topic of Rabbi Ephraim Luft's ongoing attempts at controlling/banning certain kinds of Jewish music have been attracting some attention, in part due to this BBC NEWS article (which we blogged here), and in part due to recent concert bans .

There have been several approaches towards Rabbi Luft's efforts suggested by Jewish musicians.

I was forwarded an email by another JM performer who wrote "I think the appropriate reaction is to deeply respect the intent of our very frum brothers and sisters to retain an ambience of purity in their lives. And then to crank up some good rock and roll and get on with our own."

I disagree with these approaches.

1) I think the MBD clip makes MBD look bad. I do think it's fair to point out that Luft's ideas are ridiculous. I intend to do so myself, as I have done in the past. Sarcasm is an effective means of commentary. I do not intend to ridicule him personally, though.

2) I think ignoring Rabbi Luft leaves some in the community with the impression that his grievances are accurate and sanctioned by gedolim so therefore "da'as torah." The rational members of the community need to see that there is another side to the debate.

3) Although I think it is important to respect those who, upon hearing Rabbi Luft's representation of Da'as Torah, attempt to follow it, even though I think they are being mislead, I have no such respect for Rabbi Luft.

Over the course of a series of posts, I intend to take a close look at Rabbi Luft's book on the subject, "The Torah Is Not Hefker", as well as revisit some of his other essays.

I intend to demonstrate the following about Rabbi Luft.

1) He is musically ignorant.
2) He is intellectually dishonest.
3) He is a manipulator.
4) He uses "junk science."
5) He is a racist. (This is relevant because he builds his music criticism on racial theories.)
6) His approach is, in the main, not based on Torah sources.

I do not intend this as a personal attack, but as an intellectual confrontation of his ideas and their fruits. I don't believe I will convince him, as he has, in my opinion, demonstrated that he is not at all open-minded. That is not my intent. It is my hope that others, including those around the Rabbonim he has successfully manipulated, will reconsider their positions and will once again begin to consider Emes (Truth) as an integral part of their hashkafic and halachik calculations.

To start, I'd like to look at the opening and closing vignettes in Rabbi Luft's book, as I think they are quite telling in a manner he did not intend. Here's the opening to his introduction:

The gaon, Rabbi Moshe Shmuel Shapira ZT'L related that the gaon Rabbi Boruch Ber Liebowitz ZT'L used to compose songs to words from pesukim and tefillos, and would bring them to his Rebbe, R' Chaim of Brisk ZT'L who would decide if the songs were suitable and respectable to be sung to the words. Unfortunately in our times, every ignoramus who wants to write songs set to words from pesukim does as he likes, and the people who decide whether it is good or not are the businessmen and disc jockeys who run the Jewish music business.

Rabbi Luft's point in telling this story is obvious. However, he seems oblivious to the fact that he has arrogantly arrogated for himself the role of R' Chaim of Brisk, taking on a task that (if one believes the story) even the venerable Rav Boruch Ber was unable to do.

At any rate, it is clear that Rabbi Luft has in fact designated himself Rav Chaim's memale mokom to address such issues for the entire Jewish community worldwide. Thus far he has had limited success outside of Israel (and enjoys far from total success in Israel). However, his ideas are spreading here resulting in other kannoim taking up the flag against concerts etc. These ideas need to be addressed.

Here's the closing vignette from the book.

It is a transcription of a public address given by Rabbi Yisroel Elya Weintraub Shlita in the Lakewood Yeshiva in Cheshvan, 5755.

THROW THE TRASH OUT OF THE HOUSE!

At present in this country we are witness to the phenomenon of 'Greek song". Two of the mushchossim of the tzibbur who were thrown out of Eretz Yisroel returned to America with their merchandise to sell to the public. One of them made rachmono litzlan, a song about the most important principle of the 13 principles. The second took examples from this to make a song about the destruction of Amolek, and they turned them into jazz Rachmono litzlan - literally! What happens to a person's heart when he listens to this version of mechiyas Amolek? He hears that to wipe out Amolek is jazz! Is it possible to receive any good influence from this? Or chas vesholom the opposite, that he is disconnected from the whol concept of destroying Amolek? Or if he hears 'Moshiach' with that imbecilic nigun - is it possible to elevate oneself by hearing this? In this way they are killing the public, and we have to publicize them by name - one is called Freed [sic], and the other is called Werdigger [sic]!

Anyone who lets their songs into his house must know what this will cause to his Torah. Elisha ben Avuya, one of the four great members of the chaburah, did not stop singing a Greek song, - and it made him into a different person and finally a heretic! We have to throw this out of the house! Throw it all out! And not let this trash remain in the house!

Apart from the incendiary language, there is another serious problem with Rabbi Weintraub's words. Rabbi Weintraub is respected as a godol, whose words reflect da'as Torah, which is held to be infallible. Yet, these words are demonstrably untrue. Firstly, neither "Werdigger" nor "Freed" were thrown out of Israel.

I don't know MBD well, but I've had the opportunity to get to know Avraham Fried somewhat, and spend a Shabbos with him and his beautiful family, and Rabbi Weintraub's characterization is so far off the mark that it's laughable. I won't go into details. Suffice it to say that Avrohom Fried is a true Chabad chossid who makes a profound kiddush Hashem in his personal and professional life. I may not like many of the songs he chooses to record, but I have a tremendous respect for him personally, and I love how he sings real Chassidic music. Rabbi Weintraub's public shaming of him is unjust and anti-halachik.

It is also unwarranted. It is clear from Rabbi Weintraub's description which specific melodies he's referring to. It's also evident from the timing of when the speech was given. Both of the "horrible" songs he describes were recorded by MBD, not Fried. In other words, Rabbi Weintraub publicly named and shamed Avrohom Fried for recordings he had not made. There are two possible options. Either Rabbi Weintraub doesn't care about factual accuracy or he was mislead by askonim like Rabbi Luft. Either is unacceptable.

These two vignettes are very revealing, but they do not present Rabbi Luft and his enablers in a positive light.