A reader sends in the "rental agreement" included with Mendy Wald's latest CD. Apparently, Wald's distributor, Aderet, is trying to portray the purchase of the CD as a rental instead of a sale subject to the terms listed. This seems dubious on both legal and Halachik grounds, especially, since it's unlikely that most purchasers will be aware of the terms at the time of purchase. And, the terms explicitly violate the Fair Use provisions of US copyright law.

Here are the terms, which are included in the CD's liner notes. 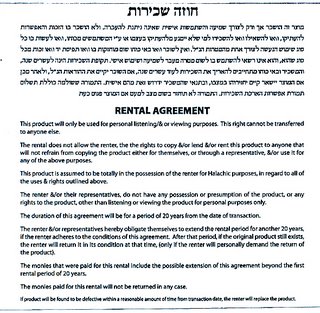 Here's the outside of the CD case:

However, I suspect that this rental approach will not help and ultimately makes frum people look foolish. The notion that you have to have some sort of "chap" to get people to behave properly has implications that make religious Jews look bad.

Here's how this can be viewed:

1) The sellers concede that unauthorized duplication is permitted and that's why they have to resort to "renting" this product. This implies that the distributor and the community are dishonest and don't respect copyright laws.

2) The sellers know that unauthorized duplication is illegal. However, they do not feel that religious Jews will obey the law against stealing intellectual property. They do think that can be tricked into obeying the law through the use of a rental agreement. Why this should work is left unexplained. This implies that the community is dishonest and stupid. It implies that people would steal outright, but can be tricked into not doing so because they'd be afraid to break a rental agreement; one without any enforceability or teeth.

3) It makes frum Jews look like they won't obey laws unless they're explicitly phrased in halachik terminology. This makes the community look dishonest, devious, and disrespectful of US law.

The standard "All rights reserved. Unauthorized duplication is a violation of applicable laws." works fine.

The "rental agreement" is a cute idea to put on a Purim album as a gag, but not much else.

Comments, anyone?
Posted by Hasidic Musician at 11:21 AM